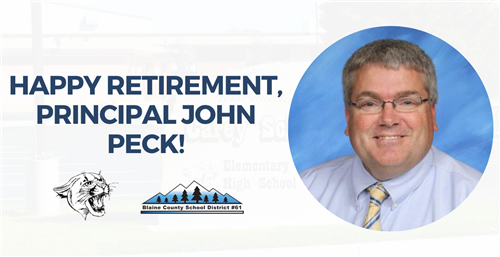 Glenn, who has served as principal for the past nine years, has been the driving force behind the school’s successes and achievements, including significant increases in graduation rates and academic growth. His leadership, combined with a staff that focuses on making personal connections, has allowed SCHS to become a shining example of best practices in using a competency-based secondary education model.

“I want to thank Mr. Glenn for his incredible leadership of SCHS over the past several years and for the commitment he has demonstrated for students throughout his career in education,” said Fritz Peters, Superintendent of the Blaine County School District. “There is no question that the school has reached even greater heights under his leadership. We are sad to see him go, but we wish him the very best in his retirement.”

Peck was hired in Blaine County in 1994, and served as a Vice-Principal at Wood River High School, and Principal at Carey since 2001.

“Over his time at Carey School, Mr. Peck has built a community-oriented culture, with a team of highly qualified teachers and skilled paraprofessionals who work together to provide the very best educational experience to students,” said Peters. “Mr. Peck has been very committed to the Leader in Me program and developed Carey School into a Lighthouse School as identified by their strong mentorship program. He has always put student achievements above all else and he is a great advocate for the kids and their successes. I want to congratulate Mr. Peck on an exceptional career in education and wish him a happy retirement.”

District administration has already begun the process to find the next principals of SCHS and Carey School.