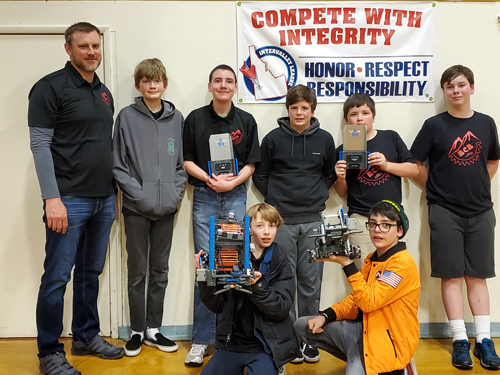 On Saturday, March 7th, the Wood River Middle School’s Robotics team won the Idaho Middle School Excellence Award which qualified the team to attend the World Robotics Competition in Louisville Kentucky.  The Excellence Award is the highest award presented in the VEX Robotics competition. This award is presented to a team that exemplifies overall excellence in building a high-quality robotics program.

Now entering its 13th year, VEX IQ Robotics will bring together the top student‐led robotics teams from around the world to Louisville, Kentucky, on April 25th to May 1st, 2019. Wood River Middle School’s teams will be 2 of 400 Middle School teams from around the world that have qualified to attend this event Sponsored by the Robotics Education & Competition (REC) Foundation.  The VEX Robotics and VEX IQ Robotics Competition is the largest and fastest‐growing middle school and high school robotics program globally.

Each year, a new engineering challenge is presented in the form of a game. With guidance from mentors and coaches, students design and build robots to address the challenge and then put their creations to the test in a series of tournaments. In addition to learning key engineering concepts, students gain valuable life skills including teamwork, perseverance, communication, collaboration, project management, and critical thinking.

Jeremy Silvis, Teacher and Robotics Coach from Wood River Middle School stated, “These teams have been extremely dedicated this year -- Starting back in September they have worked hundreds of hours perfecting their robot designs, coding and programming before school, over breaks and weekends. I am very proud of how they represented their community at the State Tournament and now have the opportunity to do the same at Worlds.”