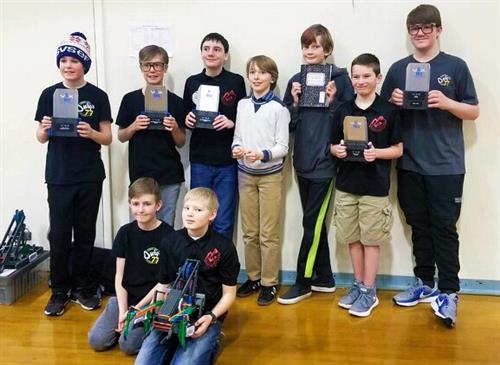 Now entering its 12th year, VEX IQ Robotics will bring together the top student-led robotics teams from around the world to Louisville, Kentucky, on April 28th to May 1st, 2019. Wood River Middle School’s teams will be 2 of 400 Middle School teams from around the world that have qualified to attend this event Sponsored by the Robotics Education & Competition (REC) Foundation. The VEX Robotics and VEX IQ Robotics Competition is the largest and fastest-growing middle school and high school robotics program globally, with more than 16,000 teams from 40 countries playing in over 1,500 competitions worldwide.

Each year, a new engineering challenge is presented in the form of a game. With guidance from mentors and coaches, students design and build robots to address the challenge and then put their creations to the test in a series of tournaments. In addition to learning key engineering concepts, students gain valuable life skills including teamwork, perseverance, communication, collaboration, project management and critical thinking.

Jeremy Silvis, Teacher and Robotics Coach from Wood River Middle School says, “These kids have worked extremely hard and put in many, many hours before school to get where they are. Their hard work paid off and they are now the top Middle School VEX IQ Robotics teams in the state.”

Students are fundraising for travel expenses and donations can be made through Go Fund Me.